The Telluride Gallery of Fine Art is pleased to present “Old Friends: Tony Berlant and James Hayward,” opening Thursday, December 16, 2021; closing Sunday, January 23, 2022. The exhibition will be on view during two of Telluride’s  Arts’ Art Walk evenings: Thursday, December 16, 2021 and Thursday, January 6, 2022, 5 – 8pm. Short videos featuring each artist are available at www.telluridegallery.com. An exhibition catalogue is available through the gallery and features archival photographs of the two artists, plus an introductory essay by critic David Pagel. 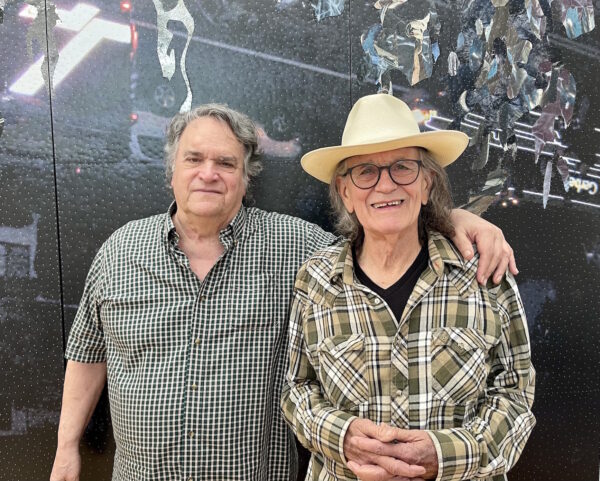 Their friendship is a matter of record. A simple, straightforward, well-documented story. Tony Berlant and James (Jimmy) Hayward met in grad school at UCLA 1966 and have been trusted friends and supporters, in and out of the studio, ever since.

“…That’s an awfully long time, and lots has happened over those five-and-a-half decades, both in the world at large and in the lives of the two artists. Their enduring friendship speaks to a deep – and deeply human – connection… a reciprocal relationship in which each brings out the best in the other, not always instantly or easily, but consistently, accompanied by the unvarnished honesty and abiding integrity that are essential for real trust and true love to get a toehold – and to have a fighting chance – in a world that seems to be increasingly overrun by the opposite: a what’s-in-it-for-me-and-me-alone selfishness that has no patience for other people because it’s based in the belief that social relationships are a zero-sum game, an everyone-for-themselves melee in which every benefit anyone accrues comes out of someone else’s loss,” wrote art critic David Pagel. 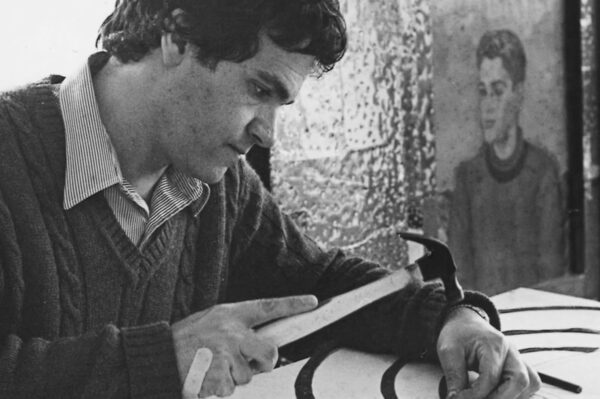 Tony Berlant back then. 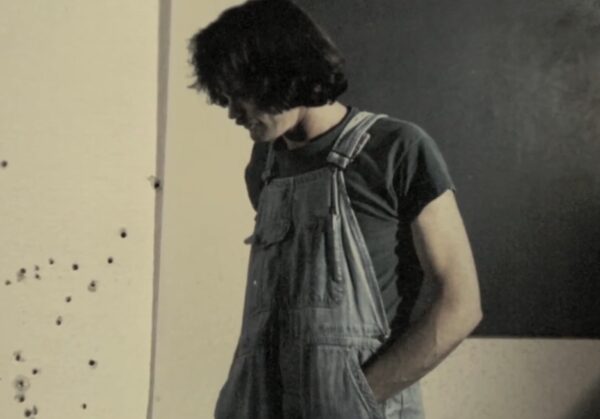 James Hayward back when.

In other words, the subtext of this gallery show – fruitful connections – is great lesson for our sometimes isolating, often divided times.

But what of Berlant’s and Hayward’s artistic link? At first glance that very strong bond wears a giant fig leaf. Brows furrow. We are puzzled.

Tony Berlant works with photo-printed metal – using the artist’s own images, plus vintage and modern metal signage and graphics, including a polaroid portrait of the artist taken by Andy Warhol – and found, printed tin, which he fastens to panels with shiny steel nails as surrogates for his thumb print. 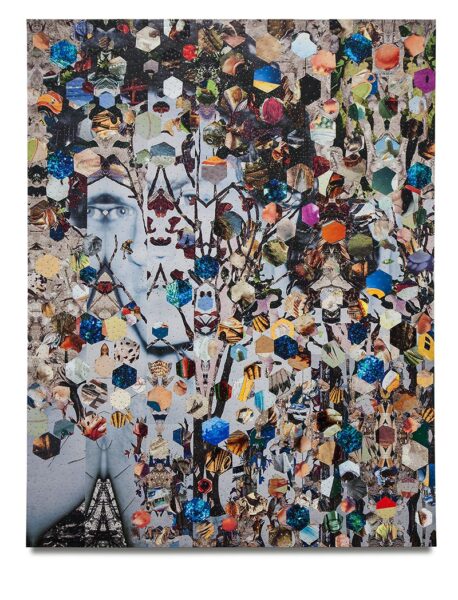 Berlant, One of One.

The end result is collages in both sculptural form and wall-mounted “paintings” worked in a way that defies dimensionality. These hybrids lie at the intersection of painting, sculpture and photography, also Pop art (for the artist’s appropriation and elevation of everyday objects), assemblage and abstraction.

Berlant’s work is at once all of, yet none of the above: He, in short, is his own “ism.” Berlant’s unique art form is animated with a seemingly obsessive physicality and smartly tricked-out pictorial illusions that force the viewer into a game of hide-and-seek in a brightly welcoming, yet somehow alien landscape. 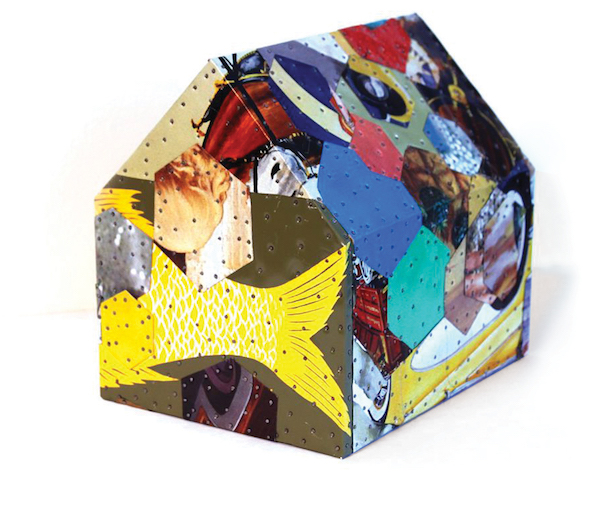 (For the record, Berlant’s art is featured in 17 museum collections across the country, including the Art Institute of Chicago, Los Angeles County Museum of Art, and New York’s Whitney Museum of American Art.)

And Hayward? On the surface his work appears to align and evolve from that testosterone-infused lineage known as Abstract Expressionism, a loose confederacy of painters that includes art world legends such as Jackson Pollack, Mark Rothko, Clyfford Still, and Robert Motherwell.

But as art critic Robert Hughes once explained: “Far from being non-referential artists, the Abstract Expressionists were obsessed with the search for subject matter, the more exalted, the better…”

Despite the manifest differences in their output, those ABExers each adhered to the primordial and primitive. They bowed to the influence of Surrealism, which stressed the power of the unconscious.

Not Hayward. His marks, according to the artist, have no meaning. 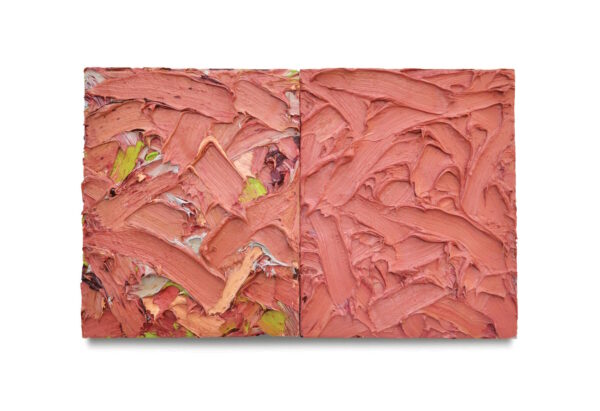 “Each mark is, well, they’re pretty much all the same. In a way it’s more like music than Abstract Expressionism. It’s like free-form jazz or something. It’s just marks piled up and piled up,”  Hayward once explained.

“I would describe my dad’s paintings as visual meditations,” explains Ashley Hayward, co-owner of the Telluride Gallery. “The mind gets lost, while the eye dances across the surface. It’s amazing to me how his works continue to reveal themselves to the viewer the longer he stays in place and observes. I have literally seen people transformed in amazement in front of Jimmy’s paintings. I understand that reaction. First you are struck by the beautiful, bold, heavy impasto brushstrokes, then the subtleties of the colors consume you. Finally you get lost in the rhythm of the marks, then more color variations and the play of light and shadow take hold. Truly a symphony for the eye and a delight to experience.”

“Through chromatic density, shaped by the humanity of each restless mark, Hayward’s paintings open onto a world of oneness and wonder,” wrote critic Frances Colpitt.

So we don’t scan for information on the surface of a Hayward. It’s all in the surfaces. Surf the surfaces. You should then find it easy to lose yourself in the swirls and twirls that shape the reflected light.

In a very real sense then, what is true of Berlant is equally true of Hayward: his art is its own “ism” too. 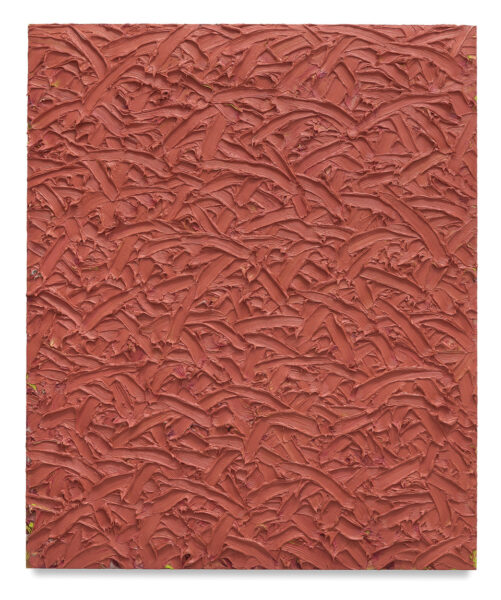 (And again for the record, Hayward has been exhibiting his paintings have been featured in 50 solo shows and 48 group shows across the country since the 1960s. His work appears in numerous museum collections nationwide too, including LACMA and the Albright-Knox Gallery in New York. Hayward was also awarded a Guggenheim Memorial Fellowship in 1983.)

The abstract work of these two art world heavies also says smart things simply, inviting viewers from start to finish to a discovery of new forms. What’s more, terminally drunk on sensation Berlant and Hayward never let us rest. And why should they? The artists themselves rarely chill.

Another tie that binds these two men is a Left Coast thing. Right Coast artists, specifically the New York school, tended to divide into fiefdoms based on their approach to art. The world of artist friends who influenced Berlant and Hayward bonded, despite disparate aesthetics. 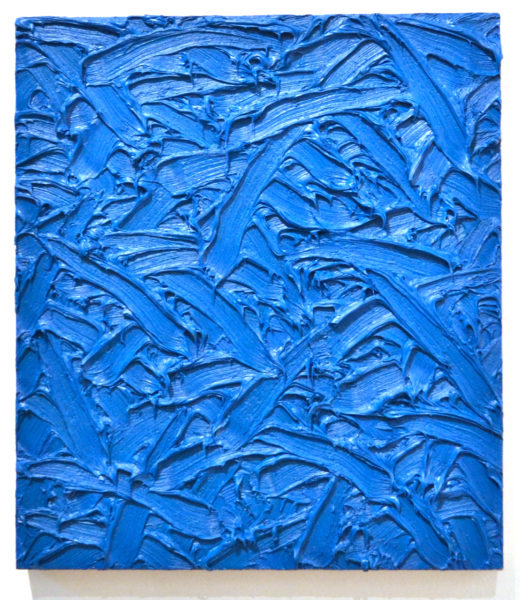 Abstract #147  (from a pervious show at Telluride Gallery)

”My father’s circle, California artists of all stripes, respected one another. Our family friend, critic David Pagel, described the LA scene as ‘completely unique in that artists from all walks of life came together to support one another’s work. There were no boundaries…,’” adds Ashley.

Two artists, Berlant and Hayward, but one ethos: art is a mirror of life that reflects the inner world of the maker, as well as his or her surroundings. It is also a map showing us possible paths out into a wonderfully nuanced universe where color, shape and composition are remarkably active and alive. 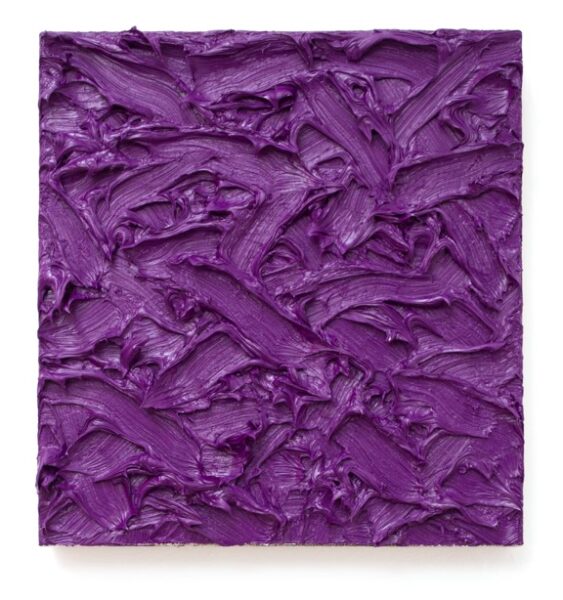 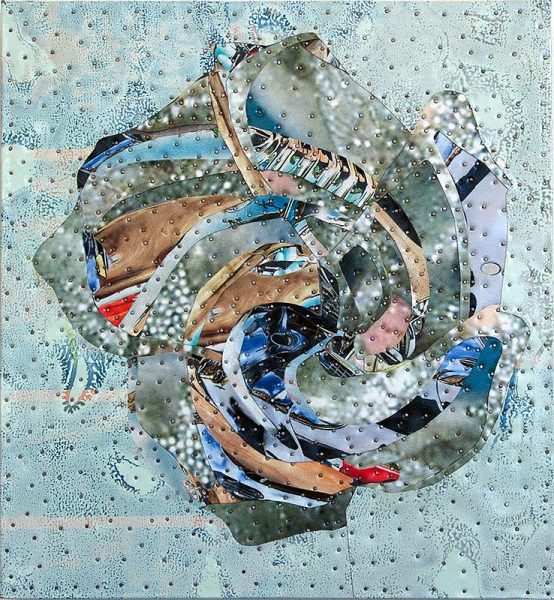 Berlant, Ready to Roll (from a previous Gallery show).

“Several factors inspired the exhibition ‘Old Friends,’” Ashley explains.”Clearly Tony Berlant and James Hayward are stylistically different, but in their approach to creating a final product they achieve the same end: compositions that touch our soul with their energy and urgency, while also delighting our eyes.”

And wonder. Nothing more, nothing less, is the point of Berlant’s and Hayward’s ongoing efforts.

“In a sense, Tony and Jimmy have figured out how to eat their cake and have it too,” explains Pagel. “Their friendship brings together the best of two worlds, combining the unselfconscious actions and solitary contemplation of the studio with the back-and-forth, to-and-fro of honest conversation between people. Their friendship also brings out the best of each artist, giving each another pair of eyes through which to see what they’re doing. And viewers, of all shapes and stripes, benefit magnificently from their friendship. Rather than telling us what to do, like some pedagogue or know-it-all, they show us how to interact with their works: Beginning with trust, and sticking with it for a while, we might very well fall in love with what they are up to as artists, entering into relationships in which we make all sorts of unexpected discoveries, in both their art and in ourselves. This exhibition at the Telluride Gallery is a modestly ambitious attempt to consider friendship as an essential ingredient of art, especially when it comes to the works made by Tony and Jimmy.”